Fout was married to horse breeder and steeplechase jockey Paul R. Fout in 1951. Riding and working with horses was a family affair: she grew up riding and competing herself, while her son Paul Douglas became a champion steeplechaser, her daughter Virginia an accomplished hunter-jumper, and her daughter Nina an Olympic bronze-medalist with the 2000 USA eventing team in Sydney. Nina's mount at the Olympics was Three Magic Beans, a Thoroughbred sired by her father's racehorse Hidden Capital.

Fout was a fixture in the community as a painter, sculptor, illustrator, sportswoman, and conservationist. The paintings, sculpture, wax molds, sketches, and ephemera in In Focus: Eve Prime Fout share perspectives on both her life and career: Fout’s art was inspired and informed by her love of horses, equine sports, and the Virginia countryside.

This exhibit is made possible through the generosity of The Fout Family, on behalf of the Dun Foundation, and Virginia Guest Valentine. 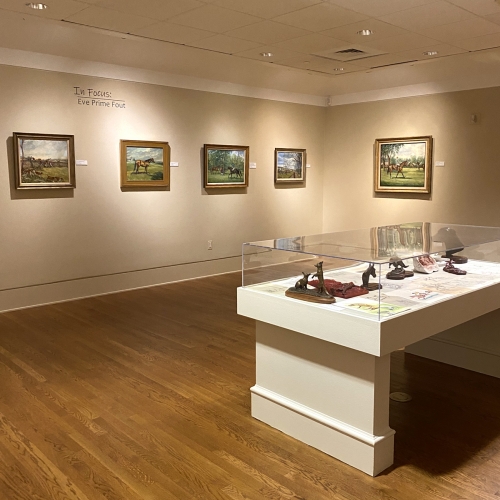